I gave a talk in November to a local high school about computer science as a career field. Aha, I think – I’ve given this talk before – I’ll just brush up my well-prepared slide deck.

My slide deck has a graphic in it that looks something like the below. All credit to Daniel van der Ende and his work on the GitHub Data Challenge in 2014. It’s an interesting way to show the various combinatrics of languages that are used in projects today. It’s actually common nowadays that a project has multiple types of code in it. Often there’ll be the front-end (often JavaScript + HTML + CSS) with some sort of back-end. The point I wanted to convey in the original presentation was that software engineers often don’t just need to know one language. I then would riff lightly one which of the languages they could see in my slide I’d worked with in some form or fashion. (In the snippet you can see of the image, Perl, Scala, Go, JavaScript, Ruby, and Lua. I did just enough of CoffeeScript to not want to do it anymore…) 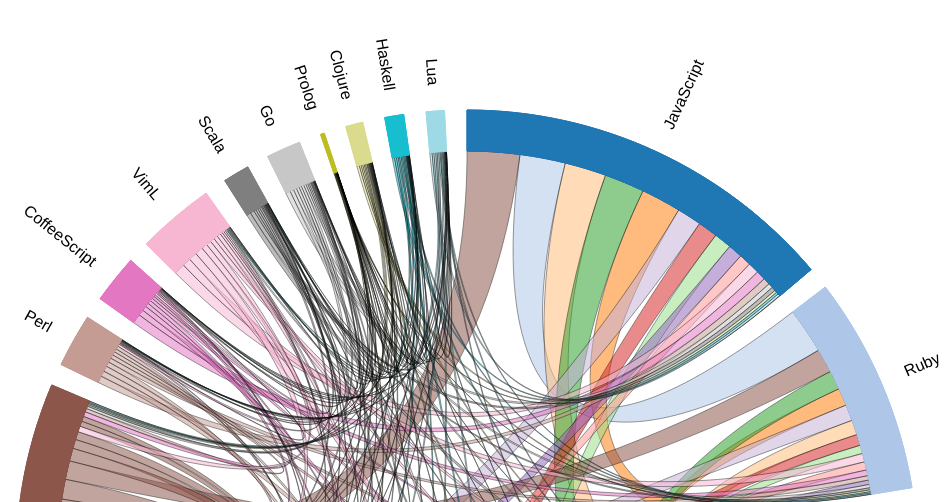 Well, now it’s 2021. The slide information needs to be updated, and Mr. van der Ende has not updated his image, but he was kind enough to make available his source code and a handy README file which walks (loosely) through how to get the data.

Challenges then solved so far:

Note: I ultimately ran into enough things with it that I left the original image. Still on my todo list to bring this to resolution…