I’ve spent the last few nights searching YouTube and Pinterest for designs for a wolf balloon animal. Thursday, Clementine is doing a Blue and Gold dinner, and while I had a tiger and bear design, I hadn’t found a wolf that worked for me. Meaning, I found _great_ wolves that were beyond the time and skill level I can use in a room filled with 25-40 kids. Plus, I wanted the visual wow factor of the wolf to be in line with that of the bear and the tiger.

Several nights spent looking, trying, even doing some attempts at designing on my own. Lots of balloon detritus, no wolf.

Skipping to the good part: I present to you – my wolf! 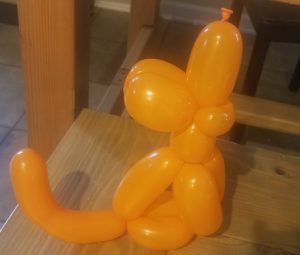 Single balloon design, imagine him in grey…    Notice the lower jaw forcing his head up in a howl, and then the tripod body.

Really happy with how he turned out…  now to just practice him 10 or 15 more times to make sure he consistently turns out well.  The cost of a balloon or two per kid isn’t expensive, but for me there are always a whole lot of balloons left around the house as I work to get ready for an event.

Life is busy. That seems to be a characteristic of how I do things, rather than a stage of life. In high school, I ended up taking a night class for typing, because it didn’t fit into the day’s schedule. Junior year, I convinced a teacher to give up her study period to teach me a math class that wouldn’t fit into my schedule any other way. In college, I at one point was a triple major, with a job, while captaining a rugby team, and fitting in some volunteering activities. Let’s just say I tend to fill the glass with _all_ the rocks.

The analogous activity of juggling is highly appealing to me. In juggling, everything gets held for just enough time to get something done, before moving to the next thing. It’s a game of synchronized holding: I can’t hold but so many things at a time, so the air holds the remainder until it’s those things turn. For Christmas, I received a set of spinning plates: there’s another saying beyond someone juggling – that they’ve got a lot of plates in the air. Right now, my set has three. I can get two spinning on sticks that I’m holding, and I can have the third on my head. That third spins when I do.

When I’m really on my game with those plates, I can throw them up in the air…. or both two spinning ones up in the air at a time… or once I even managed to throw between my two sticks and have them land and keep spinning… A few weeks ago, my daughter and I were passing spinning plates between us – timing and aiming our tosses so that the plates didn’t collide and could land solidly on our throwing partner’s stick.

It’s still a matter of synchronization. When I’m in control of all elements, the plates keep spinning. When I lose control, things drop. Or worse, things fly – traversing not just down but down and away, or down and oh my goodness AT. (I did just invest in some performer’s insurance, in case my things fly or fall in ways that might cause lawsuits.) . The dogs and cats are generally opting to be FAR away this evening. Thankfully, spinning plates are plastic.

Realized my last post was almost two months ago! It’s been a bit of a busy period.

Clementine shared balloons and fun with kids at a community festival, marched in a parade, and served as a entertainment on the midway. Oh, and got herself a new pair of polka dotted oversize Converse sneakers!

In between, I’ve also been working my way through a Coursera multi-class specialization on strategic leadership, and gotten to help bring a few candidates into our company. A bit more learning on Kubernetes, Gitlab, and ELK as part of the day job, too.

Oh, and we got a kitten! Strategy suggests I should keep up with my daily allergy pills. Miso (kitten’s name) is cute, but he makes ‘me so’ sneezy

Clementine the Clown makes her professional debut at a local community fair this upcoming Saturday.  She’s been a long time evolving.  As a kid, I remember being a clown for a younger sibling’s birthday party.  As a young twenty-something, I was a clown for a church event.  I think I’ve always wanted to have a comic alter ego to let me express the silly side that perhaps hides a bit in day-to-day life.  That, and that opportunity to help someone find their smile?  Amazing.  There’s so much muck in the world…  any chance I get to spread a bit of positive-ness is my own little jab at sin and evil.

At one point, I quit software development and strongly considered being a children’s clown as my living.  Reality struck quickly: I had left software because it was consuming all of my time, including time I’d rather have been spending with my hubby (we had no kids at the time).  Children’s clowning would likely consume the weekends and evenings..  the very hours my hubby would be off of work.  I’ve since realized that school and library gigs might have been a way to make a path, but that’s come with further exploration into the clowning world.

About a year ago, I was at a Christian retreat with a group of total strangers, and confessed a dream I had to build a clown troupe as a ministry offering of our church.  Focus a group of folks on bringing joy and laughter into the world and go to places that need more joy and laughter: hospitals, nursing homes, church preschools, church itself, just about everywhere!  My retreat partners encouraged me, and I sought out a local clown alley as soon as I made it home.  That alley has helped connect me with a local clowning community and given me chances to perform in parades and other events, as well as learn at a regional clowning convention.

So Saturday, Clementine with her shoes of number 9, well below my actual shoe size as a person, much less a clown…  well, she’ll be engaging the kids in our community at the local fair.  A bit of tomfoolery and a bit of balloon twisting for the day.  I’ve set up a Facebook page to highlight her shenanigans, as well as her own email address.  We’ll see if Clementine can flap her wings / clown shoes a bit and fly.  With a bit of luck and a whole lot of practice and determination, Clementine might get to come out and play more often. 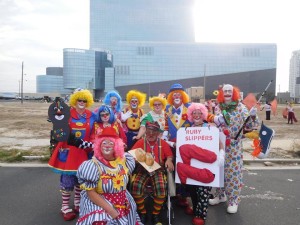 Had a great time high-fiving kids and adults along the parade route….  two miles of Atlantic City boardwalk, lined with folks on both sides.  We saw young and old, all interested in interacting with clowns and having their days brightened.  Even in my newbie clown state, I got to help brighten a few folks’ days.   Expect the wig to change by the next pic, as well as the makeup – learning with each new event how to get better at clowning…  Uh, and learning to take environmental conditions into consideration – the wind along the boardwalk made wigs, clown noses, and clown props much more of a ‘will they stay on’ kind of affair…

The past two weekends, I’ve had opportunities to go out into the community as my alter-ego, Clementine. Clementine is a blue-haired (for now, anyway) Auguste clown who’s been enjoying spending her time at summer festivals and parades with her pet skunk, Blossom. 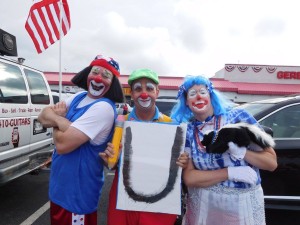 Clementine was asked a question by a ten-year old(ish) boy along the parade this morning: why does she put on her clown makeup? The answer is: with a bit of work (the makeup and costume stuff) and a good bit of energy, Clementine can be a grower of smiles and happiness. The number of kids (and adults!) who wanted to fist bump, snap pics, high-five, pet Blossom, and just generally enjoy interacting was huge! Clementine got to interact with little kids, big kids, parents of kids, and even had her picture snapped with a senior citizen or two who was enjoying the parade from a wheelchair. Blossom was already wearing beads to deck herself out for the 4th of July parade, and got a new necklace from a little girl along the parade route who was making bead necklaces and thought Blossom needed one more.

My ultimate goal is to get some experience under my belt and see about sharing this opportunity with folks in my church. Our clown alley has members from my age and younger, to retired folks. We have folks who have physical limitations, and some who will never be able to live on their own due to mental handicaps, but who delight in ‘bumping a nose’ and sharing a smile in the community. Each clown has their own set of gifts to share, which seems to me to be a perfect example of what we aspire to in Christian ministry. “But in fact God has placed the parts in the body, every one of them, just as he wanted them to be. If they were all one part, where would the body be? As it is, there are many parts, but one body.” [1 Corinthians 12: 18-20]